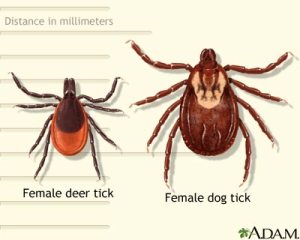 ^^^^^ Did I mention that I can’t stand these blood sucking vampires????

When I was putting on the Toyota badge, I must have picked up another one. I found it later that night dug into the top of my right thigh. That was two days ago and this morning I had a red spot the size of a Frisbee where the tick used to be.

^^^^ Kenny, Cyndi….maybe we should get a dozen Guinea hens? Maybe some that don’t make noise. 🙂

I mentioned it to Nikki at the UPS store and she insisted that I get it checked out at Urgent Care.
The doc cleaned the area where I was bitten and prescribed me antibiotics.

……….so while I was there, I had him check out my other thigh which also has a red area the size of a Frisbee. No, it’s not another tick, but a huge boil that’s growing by the day. It’s getting rather hard to walk carrying these Frisbees between my legs. I probably look like I need my diaper changed from behind.

The doc said that he might have to lance it if it doesn’t go down in a few days. Just the thing I wanted to hear. 😦

Stopped by Safeway to get the prescription filled.
Still no coffee. I talked to the manager about them always being out of stock. He told me that Tom was in a car accident. Now I feel kind of bad for firing him.

6 thoughts on “Ticks and Guinea Hens”