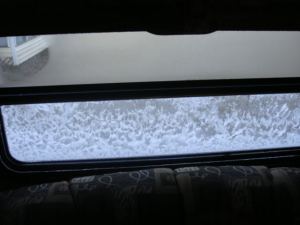 ^^^^ This was last winter ^^^^
One morning the ice was thick enough for me to chip off with a knife.
When I bought this trailer I assumed that when I told the sales people that I would be living in it
full time, that they would advise me!!
Little did I know that they had no clue.  I found out later that this trailer is not made
for full time living.  Now I know that there are trailers that a very well insulated and have
double paned windows made for cold temperatures, but I’ll have to make due with what I have.
Don’t get me wrong…I love the floor plan and the storage space that I have in here.
It is much better than most trailers.
I spent most of yesterday trying to find more large bubble, bubble wrap.  Had no idea
it would be so hard to find.  The first place I went to was  “The Room Store”.  I was met
by a salesman who just about brushed me off.  Pointing his nose high up in the air he told
me: “we don’t have that!”  Next, I went to Pier 1, but they recycle and use it themselves.  Lazy Boy
store gets their shipments with peanuts.  Office Depot and Staples only have the small bubbles.
I only have the living room, dining room and kitchen windows left to do.  So I’m hoping that
Aaron will be able to get me just a little bit more.
Meanwhile, I’m really happy with what I’ve done so far.  I took down the black-out curtains
in my bedroom.  Now there is much more light and it doesn’t feel so gloomy back there.  The curtains
I put up in front of the door.  LOL….I had to dash water on Silly twice when she tried to climb up
the curtains.  It looks like she got the message, I’ll know for sure when I leave her alone to go
to work tonight.

^^^^I removed the warning tags that I still had everywhere^^^^
I can’t believe that I didn’t do that before.  Weird….

Today I’ll be spending much of it re-arranging items that I haven’t used in the
past few months.  I have a large storage area under the bed which I can access from
inside and outside.  I’ll get out the small electric heater while I’m outside.  I’ll also go through
my closets and see what I can move out of there.  The only complaint I have about the
closets is that there are no shelves in them and there is a lot of wasted space.  It’s also
hard to keep organized!  I can’t seem to find my spare light bulbs so I’m hoping that I will
run into them by accident.

7 thoughts on “Insulating with Bubble Wrap”