The router came in at around 10 AM yesterday.  As soon as T-Jay got up he installed it.

The iPhone, the iPad, the Android Phones, MAC computer and the computer running Windows 8.1 all worked fine.

The problems started with the computers running Windows 10.  No matter what we did, the Windows 10 computers could not see the router.  Looks like many people were having the same problem. No help online and no help from the routers website.  No fix in sight.

So here it is, all packed up and ready to be returned.  I’m so disappointed!

With all the fuss, I did manage to finish test number 2 and started on test number 3 for the work-at-home job that I’m trying to qualify for.  I had until 9:18 AM this morning to finish both of them.  I submitted the last test at around 6 AM this morning.  Now the waiting game starts.

I’m really enjoying the work.  I’m writing captions for videos. I will need lots of practice in order to become faster at it.  I’ve already learned a lot and am getting more comfortable with it.

By captioning three short videos, I’ve learned that Jon Steward sometimes studders and that many people talk really bad.  I’m glad that I can omit speech dysfluencies.  LOL…I had to look that one up on Wikipedia:

A speech disfluency, also spelled speech dysfluency, is any of various breaks, irregularities (within the English language, similar speech dysfluency occurs in different forms in other languages), or non-lexical vocables that occur within the flow of otherwise fluent speech. These include false starts, i.e. words and sentences that are cut off mid-utterance, phrases that are restarted or repeated and repeated syllables, fillers i.e. grunts or non-lexical utterances such as “huh”, “uh”, “erm”, “um“, “well”, “so”, and “like“, and repaired utterances, i.e. instances of speakers correcting their own slips of the tongue or mispronunciations (before anyone else gets a chance to). “Huh” is claimed to be a universal syllable.[1] 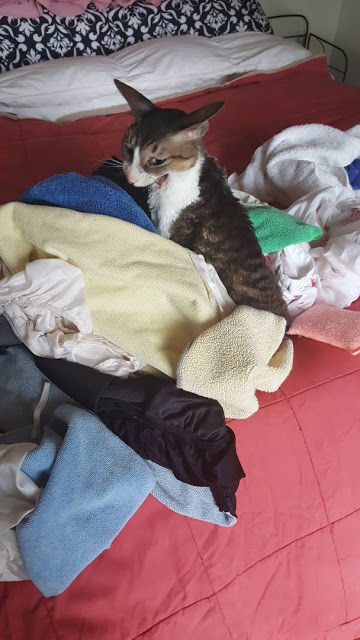 While I was taking the tests, I was cooking and washing/drying clothes.  ^^^^Silly was helping.  NOT!  She was just taking advantage of the warmth.