My central heater is still broken.  It needs a $700 part plus labor to install it.  I have plug in heaters, which did just fine last winter.

I have this nice little Lasko heater in my room….that I can’t use.

When I turn it on, within minutes, even if I don’t turn anything else on, it trips the breaker.   This home was built in 1974.  I’m sure at that time, the only thing plugged up in the bedrooms was an alarm clock and a light…maybe a radio.  Today we have computers, speakers, TVs, phones and heaters.  Way too much for the breaker to  handle.

So last night  it was time to rig up something. 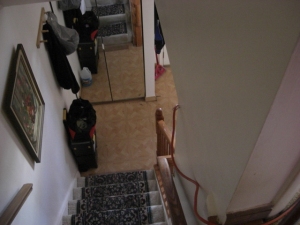 At this time, the only thing running downstairs is the refrigerator and the clock in the stove, which I don’t know how to disconnect.  Everything else is on surge protectors and gets shut off after use.  Now the heater is plugged into the downstairs bathroom.  The only problem with this setup is that now you can’t close the bathroom door.

I think, I’ll rig it up another way.  From the outside.  It helps if you don’t give a lovely shit what the neighbors think. 🙂

I’ll be right back.

Good old bubble wrap to the rescue.  Why on earth would they make it green?

Through the dining room window under Silly’s careful supervision.

Then into an outlet all by itself in the kitchen. 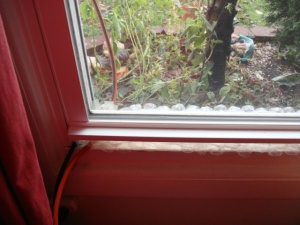 It sure will be nice to have heat without having to run downstairs to reset the breaker.

The only thing I’m going to add is a new, more heavy duty extension cord.  The one that I’m using now gets really hot on both ends after the heater is on for a while.   It still beats having to come up with over a thousand bucks to fix the central heat.

Mmmhhh….I think somebody’s trying to tell me something.