So I thought that my Verizon Storm had downloaded the new version of the software during the night. Turns out it didn’t and I had the same version as before.

I tried to download it again yesterday afternoon and it took over 3 hours. By the time it finished, I was having serious Gmail withdrawals.

It is very seriously faster than before, especially the internet. Nice…I’m glad I upgraded!!

Yesterday morning I went to shop for car insurance since my policy was about to expire and they had increased their premium. It was only about 10 bucks, but it still pissed me off since I had been behaving and had not received any tickets in over a year.

The last one I got was for speeding due to a faulty speedometer. The speedometer kept on getting stuck on 67 mph no matter how fast I was driving. Even though I did fight it and had my speedometer calibrated and then replaced, they still wouldn’t drop the ticket. They did, however, reduce it from reckless driving to simple speeding.

Anyway, my son had told me about the Tango Insurance Agency that had given him a very good rate.

When I arrived Alexander asked me how I had heard about them. I told him that I didn’t have a choice because of my tattoo. 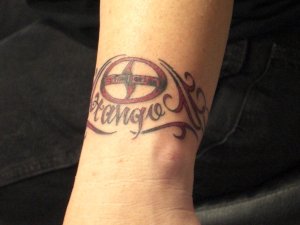 I walked out of their office with a savings of 400 bucks a year….wooohooo!!! I’m such a happy woman! 🙂

It’s going to be hot as hell today…91 degrees. I am so not looking forward to this. Even though it is easier for me to bare with the weight loss and the short haircut. I wish I could lose another 20 pounds by 2 PM.