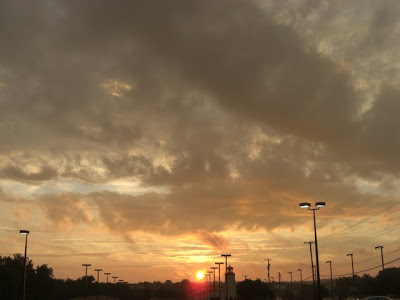 ^^^Last night, right after the storm. There was a double rainbow, but only one would show up on the photos.

What a beautiful day!! Too bad that I have to go to work today. It’s a nice low 60’s right now. Last night I actually had to turn the fan off. It looks like we won’t see the 90’s this week! Woohoo!!!

Yesterday was pretty crazy at Miller’s. The phones were ringing off the hook. People were getting really rude and pissy. I was glad when it was finally over. Did I mention that I hate phones?? Another five hours of this today, then it’s over with the Cash and Clunkers….for now. Then all we can do is keep our fingers crossed for the government to hurry up and reimburse the dealership.

This morning is laptop maintenance time. Cleaning out old files. I ran CC Cleaner earlier. I downloaded Piriform Defragler and it’s been running for over an hour after I already defragmented with the software that came with this computer. Hopefully I’ll be finished by noon.

Tuesday morning I have an appointment to have those two spots on my forehead removed. I hate needles in my face more than anywhere else on my body and wish they would just knock me out. I wonder what the result of the biopsy was.

I have one car chase to do today. I’ll go there before going to Miller’s. If no one’s there, I’ll catch them on the way home tonight. Yesterday I chased a car on my lunch hour.

Time to throw some food in my stomach and one more pot of coffee. I hope that everyone has a splendid Sunday. 🙂

I'm trying for the weekend of the 6th…got my fingers crossed and everything I have two of. 🙂

i love the pics too – especially the last one with all of the clouds! i love rainbows but have never seen a double rainbow!!!it sounds like you had a pretty hectic weekend Tango…i hope the coming week is a little less so for you!

Thanks Joe. I'm surprised the rainbow showed up at all with my little camera. Would have been awesome to see both of them. That is actually the first time I've ever seen a double rainbow.Weekend…..Ha, what weekend??

Love the photos! The rainbow looks good. You did well to capture that at all.Hope you had a good weekend!