Skip to content
First, it was giant black ants and now it’s Dirt Daubers.  Sigh….never a dull moment around here.
I found a nest in one of my exhaust vents outside by the door. 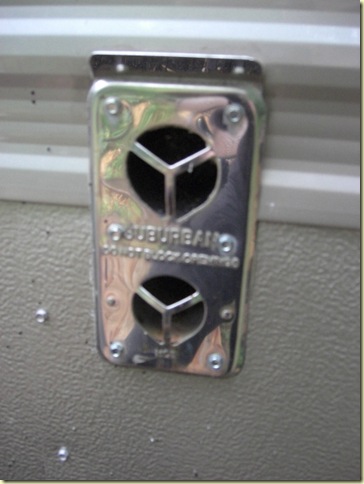 I think the upper vent is for the stove and the lower is for my refrigerator.  I had asked T-Jay to come over and remove the cover yesterday, but after he removed the first screw, the rat bastards started to swarm.
This morning I decided to duct tape the openings before taking the rest of the screws out.

Then I sprayed the hell out of the with dishwashing liquid and vinegar. 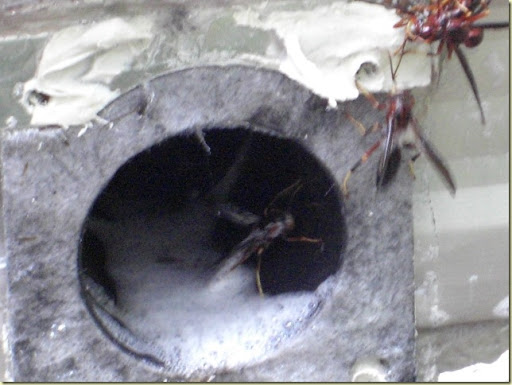 After they kicked the bucket I took a knife and pulled the nest out.  It was almost big enough to plug the pipe.

During lunch at work, I stopped by Lowe’s and picked up some screen which I will put behind the cover tomorrow so that the rat bastards won’t be able to get inside anymore. 🙂  I’m thinking that I should figure out a way to get on the roof to see if there are any nests near the A/C unit.
Tomorrow before I go to work,  I’m going to Culpeper to check out a propane vent free heater that a guy has on Craigslist.  Yep….we’re in a heat wave and I’m getting ready for winter.  I’m also going to start looking for another propane tank.
I belong to the Fauquier County Yahoo group.  Last week a lady had a large piece of foam rubber to give away.  Friday morning I went to pick it up.  I have three ceiling vents that I like to cover up when it’s very hot or it’s very cold.  A company makes these cushions that you blow up with air and stick in the vent openings.  They cost 12 bucks a piece and last about a year.  Then the air starts escaping and you have to blow them up a couple of times a day to keep them stuck in the openings.  The ones that I had finally gave out and I threw them away.
I took the foam rubber and cut out three 14”x14” pieces and then stuck them in the vent openings.  It doesn’t look all that great right now, but I have some light weight white curtain material which I will cover them with.  Wish I would have done this from the get go.

Another night without the A/C on.  It’s a lovely 74 degrees out.  I have the fan on and the door wide open.  It’s just me, my pussy and the crickets out here. 🙂