It was supposed to get really nasty last night, but this morning the sun is shining and not a wet spot anywhere.  Ha, it made it all the way up to 33 degrees today with winds between 17 and 29 miles an hour.  I know I will be freezing at work tonight.  It’s going down to 16 degrees. 😦  Sure  hope the wind dies down.
I’m glad I scheduled my inspections this week according to the weather.  Yesterday T-Jay and I went to Catalpa to do a home and property inspection.  I get to do this property every year and remembered that awful driveway going to the house.

This photo doesn’t show how bad it really is.  T-Jay was driving and having a ball off-roading.  I was a nervous wreck and didn’t take photos of the part where he had to either go around pot holes or try to straddle them.  Most of it was mud further up and I was terrified that we were going to get stuck.   If I would have been by myself, I would have walked to the house.  Look at the poor Evil Twin…. 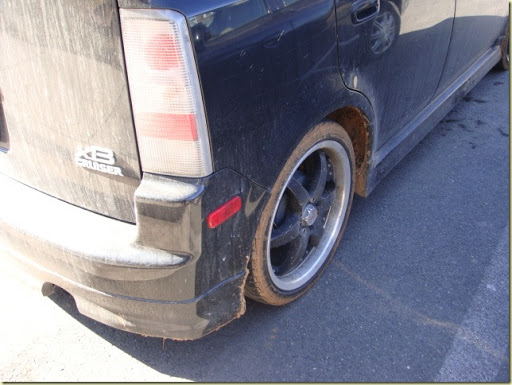 T-Jays doctor visit went fine.  I had set up the appointment with the same doctor that I see.  Her name is Rachel, she’s in her 30’s and she’s always been very open minded ….not set in her way.  Rachel gave him a complete physical and spent more than an hour talking to us.  We were waiting all week on a ton of test results.  One of the nurses called me this morning.  The only issues they found was with the liver function test and his low vitamin D and B levels.  Other things that they tested for were Thyroid function, Lyme disease, Diabetes, Lupus, Cholesterol, and Arthritis and all these were normal….I know I’m forgetting some.   I don’t know if I should be happy or sad about the results.  Well….on we push to find the cause of his pains.  He’s got another appointment next Friday morning.
I got a nice surprise yesterday.  The bee’s wax that I ordered from Guy two weeks ago came in.

Thanks Guy and thanks for the honey.  It was awesome in my tea last night. 🙂  Next week I’m cooking some cream.  I’m almost out.
The two bottles of DMSO came in also and now I have pussy in a box. 🙂 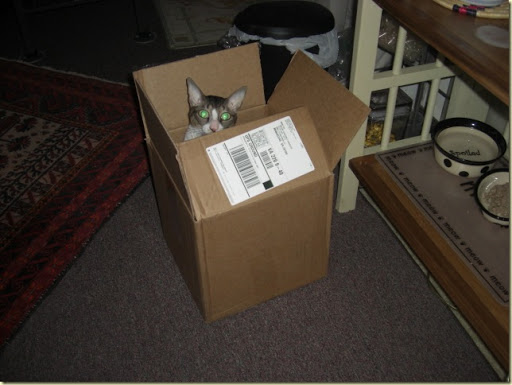 I spent this morning cooking for the weekend because tomorrow is my long day at Millers’ and I won’t be feeling like cooking.  So I stewed a chicken with plenty of gravy and some rice.  Amongst other stuff, this should keep us going for the weekend.

I just received two chases in Woodbridge in my email.  I guess they have just been slow or maybe everyone got money for Christmas and paid their car notes?  I will take care of them on Sunday before work at Millers’.  I’m going to take T-Jay with me to teach him how to do these.  This way I can accept work to do after 5 PM which they often request and I have to turn down because I work from 3 to 9 at Millers’
Well, that’s all the news for now.  Almost time to head out of here.

5 replies on “So what happened to the weather??”

Well I am glad they found nothing serious, but I know it is frustrating not knowing what is causing the pain. Hope he gets some answers soon. Take care, Sheila

Well I am glad they found nothing serious, but I know it is frustrating not knowing what is causing the pain. Hope he gets some answers soon. Take care, Sheila