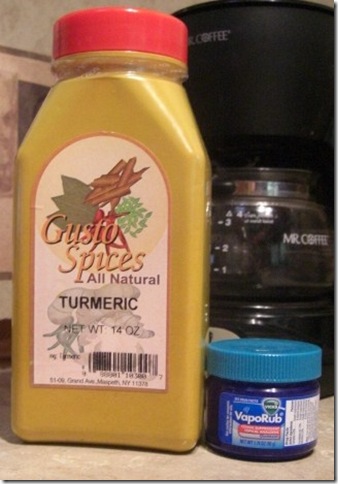 Anyone that’s been reading my dribble, knows that I suffer from reoccurring very painful boils.  Always in the same area on the inside of both my upper thighs.
Usually, if they don’t go away on their own, I end up going to the doctors. They put me on antibiotics and if that doesn’t do the trick, they lance the boil.  Within weeks I develop a new batch of boils and I go through these steps again.  No one has ever been able to tell me why they keep on coming back.  They have gotten so large and so painful, where I have had to take off of work due to not being able to walk.
Back in July, while I was miserable and researching new remedies, I found Turmeric.  Hundreds of people swore by it and I decided to give it a try.  I bought a large bottle of Turmeric at a grocery store and made a batch of tea.  The first cup wasn’t too bad with some honey in it, but after that, I just couldn’t stomach it.  I went to a vitamin store and bought a bag of empty capsules.  I filled them with the Turmeric and took 5 capsules 3 times a day.
I was so amazed and happy to find this remedy that really works.  I’ve had a few flare ups since then, but as soon as I take the Turmeric, they go away.
When it gets slow at work, I like to read up on my list of blogs that I follow.  I also like to check out other bloggers links.  Last Friday I was checking out Donna’s blog and noticed a link to Homesteading Today: a forum for country folks and there was a thread on the uses of Vicks VapoRub on infected areas and a ton of other things.  Since I was growing a new batch of boils, I decided to buy some Vicks to put on them to help get rid of the soreness while I was taking the Turmeric.
Saturday night I applied a thick layer of Vicks to my boils.  I had 10 large band aids and didn’t want to use them up while I was at home.  Well, while I was walking and sitting around the house, I got the Vicks all over the place.  LOL, I was freezing especially right in between my legs and my nose was wide open.  It was so strong that when I went to sleep and my pussy was trying to get under the blankets, she would jump off of the bed in a hurry after getting a good hit of the Vicks.  I didn’t get a lot of sleep that night since she kept on trying and then changing her mind.
Yesterday morning I reapplied the Vicks but covered it with a large band aid.  This morning the soreness was gone and I can barely feel it.  One more day of Turmeric should do it…..until next time.
Now, if I could just figure out how to prevent them.